This ornate, 75-metre bell tower, which watches lovingly over the city of Porto, is arguably the city’s most iconic silhouette. It was opened in 1763 and is blessed with a beautiful barrage of Baroque motifs thanks to its Italian designer Nicolau Nasoni. Given its prominent position, you can get some amazing 360° views of the city from the top, but you’ll have to climb 225 steps to get there. 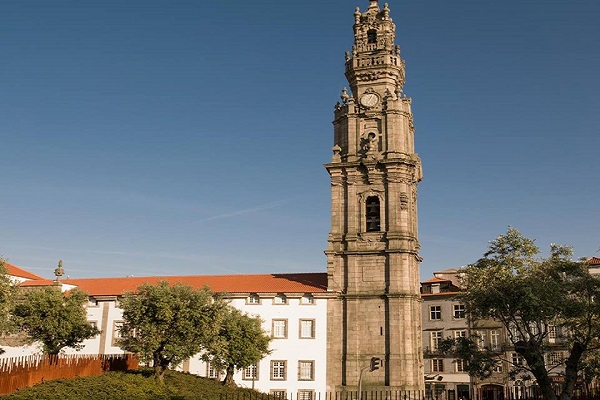 The architectural complex of Clerics, considered a National Monument since 1910, is one of the main points of interest for its Tower, Museum and Church, and a must-see location for all those who visit the city of Porto.

The church and the Tower are part of a baroque-inspired building from the 18th century, which marked the city's urban configuration, located on an uneven street, but brilliantly used by Nicolau Nasoni, who managed to create a landmark building. The Church and the Tower are adjoined to the House of the Brotherhood, which since 2014, after it became a museum, is open to the public.

In the year 1753, at the request of the Brotherhood of Clerics, the Italian architect Nicolau Nasoni presented the project for a bell tower, and in 1754 they would start the works of what would become the most beautiful Tower, dominating the entire urban landscape of Porto. In July 1763, with the placing of the iron cross on the top, and the image of St. Paul in the niche above the door, its construction was finished.

The baroque characteristics that define it are the maximum expression of the baroque spectacular, where the typical motifs of this style give the tower movement and beauty.

At more than 75m high, after climbing 225 steps and reaching the top of the tower, the view over the city is absolutely stunning. From a 360° perspective, visitors can enjoy a unique moment, whether day or night, when in special times, the tower opens its doors until 11 PM.

The Tower of the Clerics is undeniably the ex-libris of the city, and an excellent viewpoint.